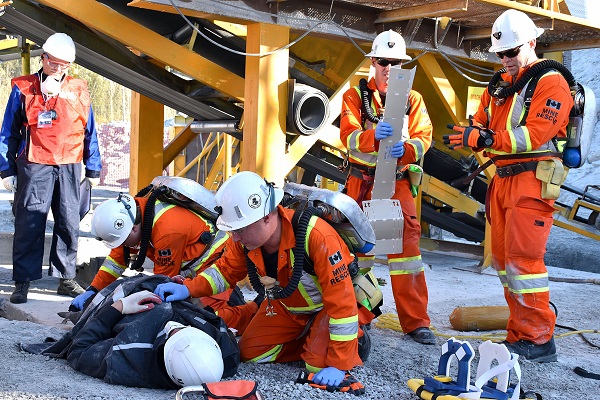 Teams from Russia and Kazakhstan placed first, second and third overall at the 11th International Mines Rescue Competition (IMRC), but they actually finished behind Ontario Mine Rescue champions Tahoe Canada from Timmins, Ontario.

“We have the Fastest Team Award,” said Adam Weagle, Tahoe Canada Captain, of the recognition received during September at IMRC 2018 in Ekaterinburg, Russia.

But time is critical in emergency response, and “time seemed pretty critical” in the competition, said Weagle. “So we focus on being fast. Even in Ontario, we’re a fast team. We move fast; we make decisions fast.”

And speed paid off with recognition. The competition featured 24 teams from 11 countries. Tahoe Canada was one of two Canadian teams. The second, Diamonds in the Rough, an all-woman team from other provinces, received the People’s Choice Award.

“The experience was unforgettable,” said Weagle. “In the opening ceremonies, it felt like you were in the Olympics. They had a parade of countries. So they took every country, and they brought every team on stage.”

“I’ve been to a lot of competitions, and you feel the competition vibe but this time you didn’t. Everyone was together.”

The competition included a mine rescue simulation, firefighting, first aid, theory, technician, and virtual reality events staged over three days. Tahoe Canada hit the ground running on their first day with the mine rescue simulation – a search and rescue scenario set underground in a gold mine.

The team completed its task in 75 minutes, but members had no time to rest before they moved on to the firefighting scenario set inside three steel shipping containers connected in a U-configuration. The team, working through the containers, had to search for missing workers; erect a burlap barricade; and extinguish fires – a conveyor belt fire, a compressor fire, and a diesel fire.

Later the team learned the scenario replicated a longwall, coal mine operation.

“We just went to it and did what we thought we should do,” said Weagle. “When we got to the hotel afterward, we were talking to the Australians, and they told us that it was a coal mine scenario.”

There were other new experiences for the team.

“The briefing was a little bit different. It was not a team briefing,” said Weagle, who was briefed directly by Briefing Officer Terry Roy without the team present. Then “I went back (to the team and) said, ‘This is what Terry wants us to do’, and off we went.”

And the Russians “are very big on oxygen conservation.”

Here teams get under oxygen before they encounter contaminated air, usually outside the headframe. In Russia “you go down barefaced,” he explained. When “your monitor goes off, you’ve hit contaminants. Oops! Stop! Back up a little bit to fresh air, and then get under oxygen.”

Weagle said, “I’m very proud of my team. They worked hard all week in Russia, and really all year for me.”

And the team, he said, is “appreciative of all the support from our community, Northern College and the (Timmins) fire department. Tahoe Canada has been great to us, great support from our management,” and from the Mine Rescue Officers who helped them train for the competition.

Tahoe Canada sent the team, which included volunteers from Timmins West and Bell Creek mines, to the IMRC in recognition of their winning three consecutive Timmins District competitions and the 2018 Ontario Mine Rescue Provincial Competition.