Mine rescue rises to heights of rope rescue 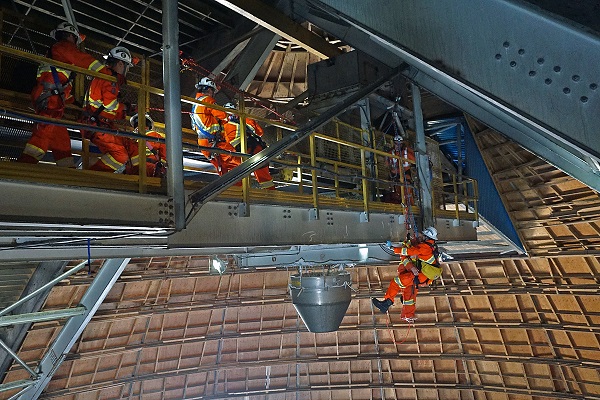 Ontario Mine Rescue (OMR) volunteers are on the apex of rope rescue technology.

“No one compares to what you guys are doing,” said Steve Minarchi, the president of T’NT Work & Rescue in Alberta. “There’s nothing better out there than what you are using.” Minarchi, whose company also serves the police, fire and tactical rescue industries, described the new system “as a mirrored or two-tension system instead of the tradition main line and belay line. We can lower and convert to a raise at the snap of a finger.”

“In the nearly 20 years that I have been involved with Ontario Mine Rescue,” he said, “our rope rescue equipment and procedures had never really evolved.” After exploring newer options, Croswell said, “it became very apparent that our equipment needed to be upgraded, and our procedures modified to reflect standard industry practice.”

The simplicity of the new system, the quality of the equipment, the lighter weight, ease of training, and the ease of transportation – one rope bag and a gear bag for each tension system, are easy advantages for volunteers to see, Croswell noted.

Minarchi met with Croswell and the Mine Rescue Officers in June 2016 to discuss rope rescue needs and demonstrate a range of gear available.

“We tested a lot of stuff ” at the fire tower at the Azilda fire training centre, he said, and later that summer, at the International Mines Rescue Competition (IMRC2016) a more select assortment of gear was available for competing teams to use and for Ontario Mine Rescue to assess.

The MPD, or multipurpose device, the key mechanism in the system which allows for quick switching from raising to lowering to raising, said Minarchi, was “first released approximately six years ago, and only became a standard about three years ago.” Also important, he said, is the system’s adaptability.

“New devices do come out occasionally, but this system will be adaptable to those devices. So OMR may tweak the sets with time rather than implement a wholesale change in systems.”

IMRC2016 “led to a few more tweaks – this works, this doesn’t, and to the creation of Version 2.2 rolled out this spring” to volunteers for training, Minarchi said. “We took pride in how we packaged and organized it. Everything is colour-coded – red for the main, blue for the belay – and labelled nice and neat,

And the training went well, said Croswell, who developed the introductory session last fall. Volunteers received a one-day introduction, he said, spending the morning hands-on with the gear, getting used to new procedures, and the shared-tension system as opposed to the GripTech’s belay system.

The afternoon was “a lot of practical work with the ropes.” “It was a lot for the trainees to absorb in their first session getting the gear,” Croswell said, but “by the end of the first day, they are usually far more confident with” the new system than they were after their first GripTech session.

“As with anything new, it just takes a little bit of confidence. It’s happening quickly, especially with people who already have experience with rope rescue,” he said.

Volunteers should have had at least one training session by June, while competition teams, who faced a rope challenge in the Provincial Mine Rescue Competition, received additional sessions, said Croswell, and that training will lead to a further review this September.

“We’ll review what when really well, what didn’t, what we can improve on. We’ll take all of that feedback from our volunteers and formalize what our procedures are going to be."