A mine rescue competitor for all positions 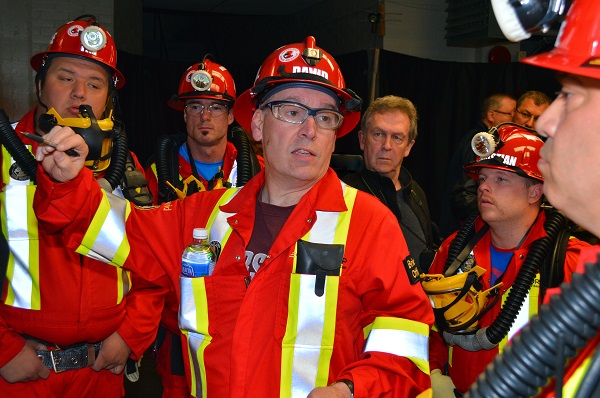 As he finished his 24th consecutive year in mine rescue competitions, including 15 provincial events as a competitor and several as a judge, Dave Hay with Goldcorp Red Lake Gold Mines, can still keep the competition details straight.

His first provincial in 1995

“It was in Marathon. There were a total of five missing men. There was a fire in an electrical sub underground, I believe. The first two men we came across were two mine rescued-trained men in a fresh air raise, no injuries, and they had SSR90s with them,” Hay recalled without hesitation.

“A geotechnical team took refuge in a vehicle. They were the second two men we found. The last one was in the electrical substation. We had to cut our way through a door to get to him. He was unconscious, broken forearm, in contamination.”

Hay had just joined Ontario Mine Rescue, completing his Basic and Standard courses, when he was approached that year by the team at then Placer Dome’s Campbell Mine. 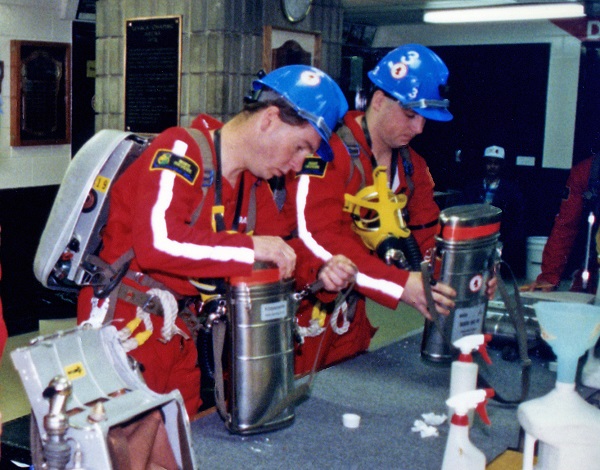 “I questioned them on it ‘Why would you approach me, I just started?’ I guess they needed that last person to get on the team and they knew I was pretty keen on it. So I agreed and it turned out to be a good thing.”

Such a good thing that Hay can’t stop accumulating good memories, having competed in all the utility positions, vice-captain, captain, briefing officer, and technician. He wants more.

“Ninety-nine in Thunder Bay was a curious one. We had to cut our way through a tunnel set filled with rebar and drill steel with the bolt cutters . . . There were some pretty keen press reporters who were out the first day, and they published the paper the next morning with a picture on the front page of men cutting through with the bolt cutters.

“So there was a big scurry to confiscate all the newspapers so the teams on the second day didn’t see what the scenario was. It provided for some humorous moments.”

In 2001, “they had three fellows in a refuge station. I believe that was the first time they had more than two casualties,” said Hay, noting Campbell Mine won that year, “2008 was the first year I captained in a provincial,” he recalled. “Except for my vice-captain, all the other members were rookies. We finished fourth. We had a pretty good showing there.”

His favourite position has been as captain because of the added challenge.

“You have to do . . . the leading, be involved in a lot of the decisions, work with your briefing officer. It challenges all your skills really. You’re in charge of four other individuals down there, and need to get the work organized and the flow going.”

Twenty-plus years of competition have kept Hay abreast of the many changes, equipment and otherwise, in Ontario Mine Rescue.

“When I started we had the flame lamp which you’d have to have a pretty keen eye to discern the different levels of oxygen and methane you’d measure. The CO testers were all plungers which are still relevant, but today’s electronics are a lot more accurate, safer.”

And then, communications “was always via Femco phones, we didn’t have the leaky feeder radios,” he said, and now “just this past year we just started using tablets for the briefing officer and the captain to communicate . . . so you’d have not only voice communications but you could transfer data” such as maps and photos.

In fact new technology, like the tablet, contributed to making last year’s provincial competition “rank up there pretty high” among Hay’s favourite competitions.

Working in a salt mine

“I went down as technician but I travelled with the team [Red Lake District winners Musselwhite Mine]. We’ve competed against them in our district many times, and they came up with their first provincial [championship].”

“That was nice to see. I know what that feeling is like to win that title and trophy, and get the bragging rights. I felt really good for those guys,” Hay said.

So, maybe because of the great experiences Hay isn’t quite ready to retire from competition.

“I’m going to try and finish up as a technician.