Chicots – or dead trees – continue to be a serious hazard to loggers. The following incidents are two real-life examples of the dangers that chicots present. 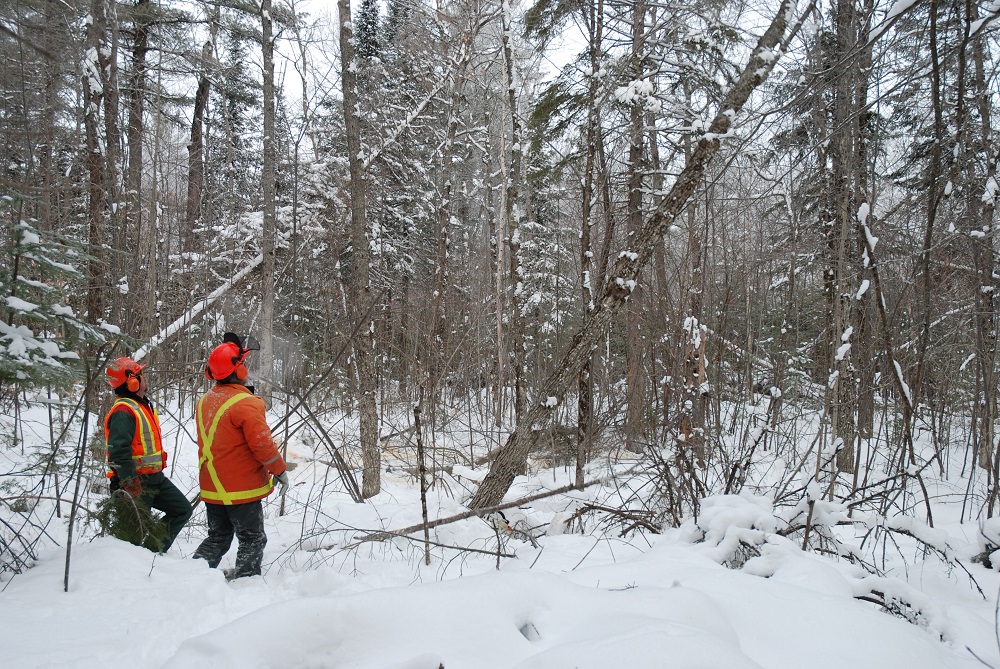 On December 13, 2011, around 4:00 p.m., an experienced 68-year-old worker in northwest Ontario -– in a conventional logging operation involving one-man cut and skid crews -– was preparing the trail for a new work area using his cable skidder. As the worker exited the skidder, a birch chicot in close proximity to the machine fell and fatally struck him. Early reports suggest that the chicot may have been disturbed by the skidder as a trail was being prepared.

Load of logs hits chicot, causing it to fall on young victim

Exactly one year and one week later, on December 20, 2012, just after 10:30 a.m., a southwest Ontario man was hit by a falling tree and died. At the time, a load of logs was being pulled from the bush and hit a standing tree – most likely rotted and unstable – and the victim was unable to avoid the falling tree.

What is a chicot?

A chicot is a tree that has either become dry or rotten. There are various reasons for this: either from normal aging or special conditions such as species extinction, climate, insect infestation, disease or human activity. Also commonly known as “widow-makers,” chicots present a tremendous hazard in the woods and need to be treated with respect.

One study showed that, when workers were struck by a falling tree, chicots were a contributing factor in more than 20 percent of those cases. These trees are dangerous because they are brittle and unpredictable. A gust of wind, vibration from equipment, a heavy snowfall, or removing nearby trees is often all that is needed for branches to fall suddenly from these trees, causing great harm. 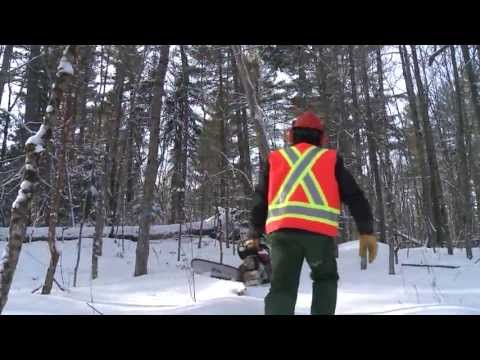 Dealing with Chicots is a brief 2-minute video highlighting the steps involved in clearing the work area of this hazard. 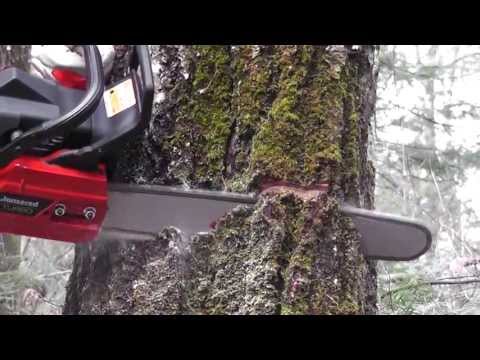 Felling Problem Trees is a 4-minute excerpt from Workplace Safety North’s Introduction to Professional Chainsaw Operation training program. Designed for a professional audience, but of interest to anyone with a saw, the video looks at eight specific types of problem trees and demonstrates the proper felling techniques for each. 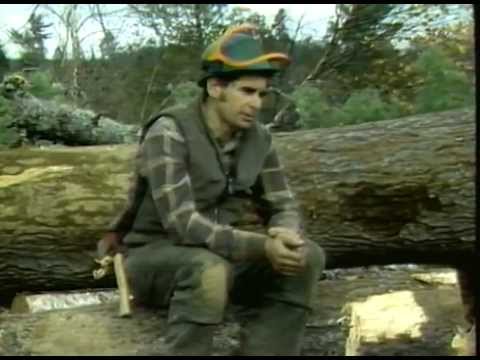 The Silent Threat is a powerful 17-minute video featuring real-life stories of loggers who survived being struck by a chicot – viewers can learn much from their experiences.

What the law says about chicots

The Occupational Health and Safety Act (OHSA) has specific legislation around logging and silviculture operations. Below is an excerpt from section 109 of Ontario Regulation 851 – Industrial Establishments dealing specifically with chicots – please see sections 103-119 for more information.

Definition
The French word for stump or stub, chicot (pronounced “shee-ko”) is defined by the Occupational Health and Safety Act (OHSA) as: (a) a dead tree, or; (b) a dead limb of a tree that may endanger a worker.

A tree shall, (a) be felled only:
(i) After all workers, other than the logger felling the tree, are cleared from the danger area;
(ii) After all snags have been cut and cleared away;
(iii) After chicots and spring poles in the vicinity of the tree being felled have been lowered safely to
the ground; and
(iv) In such a manner that the logger felling the tree is able to stand clear of the tree during its fall.
Under the Act, chicots must be lowered to the ground before felling takes place in their vicinity. In addition, the Act requires that employers and licensees must take every precaution reasonable for the protection of workers who work in the vicinity of dangerous trees such as chicots and certain wildlife trees during non-felling operations, such as work area layout, planting, maintenance, and monitoring. 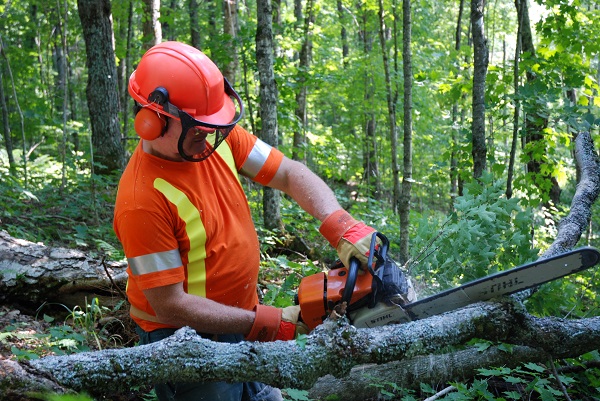 Learn what to look for, and how to conduct your logging operation safely. During the harvesting phase, chicots must be safely lowered to the ground prior to felling in the vicinity. If a chicot is selected to remain standing for the purpose of a wildlife tree, then no trees can be harvested within its vicinity, i.e. a radius equal to at least the height of the surrounding stand.

Assessing whether a tree is dangerous
According to the Ministry of Natural Resources and Forestry (MNRF), some things to consider in determining the stability of trees during non-harvesting operations include observation of the following:

Wind a significant danger
Wind is likely the most significant factor on the list because it may increase the dangers that other indicators may pose. For example, while decay, mechanical, or insect damage, etc., may weaken the tree, the tree may not become dangerous to workers conducting non-felling operations until certain wind speeds are encountered. Employers must be prepared to adjust work assignments as weather conditions change.

Where a decision has been made to remove workers from an unsafe work area, employers must ensure that the site is safe – for example, wind has subsided or unsafe tress have been lowered to the ground – before asking workers to return to that area.

How do you handle chicots?

1. Finding chicots
Experienced loggers need to evaluate the presence and condition of chicots in the cutting, skidding and landing area of their worksite. You must also have a strong awareness of how the weight and vibration of heavy mobile equipment will affect surrounding trees and soil stability. Loggers should continuously be on the lookout for:

2. Marking chicots
Once chicots are found and determined to be within the danger zone of the felling area, they must be removed. If a skidder will be used to fell the chicot they can be marked for easy identification by the supervisor by painting a brightly-coloured “X” on the trunk, or if identified by a cutter, and the chicot is solid, by scaring the trunk with a chainsaw. These markings will assist the skidder operator in identifying and removing the chicot as soon as possible.

3. Eliminating chicots
Ideally chicots are removed with a skidder. If this is not possible, they can be felled by a chainsaw.

In some cases when the chicot is large and dry, the tree may become uprooted when the skidder starts to push. It may be necessary to notch and partially backcut the chicot to ensure the tree breaks.

Using a chainsaw
When felling a chicot without the help of a skidder to apply the final push, cut it at waist level, not at knee level. At knee level, you cannot see falling hazards because of your crouched position – keep looking up! Notch the chicot to 50 per cent of the diameter of the tree. Have a second person positioned nearby (but outside the danger zone) to also warn the chainsaw operator if any part of the chicot is starting to fall. Do not try to change the direction of the fall with a wedge or felling bar. Be sure to watch out for rotten or hollow centres. You cannot count on holding wood in a chicot, so be prepared to start your retreat at any moment.

Measures and controls for working around dangerous trees

Responsibilities of workers
According to the MNR, workers must be able to identify the potential risk and hazards at a particular site. They must work safely, follow company policy and procedures, and report the health and safety hazards they see, and address any immediate dangers. Workers have the right to refuse work where they believe they are likely to endanger themselves or another worker.

Responsibilities of Employers and Licensees
Employers and licensees can control the risks associated with working around dangerous trees by ensuring: