Introducing the next generation

Newest Mine Rescue Officers share a passion for mine rescue 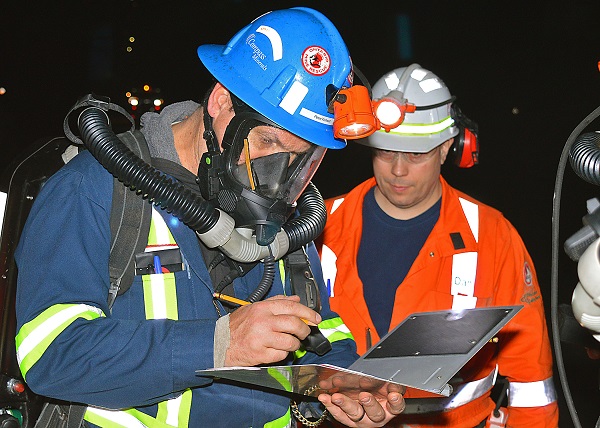 Mike Krell and Dan Rulli, hired as Ontario Mine Rescue Officers in September 2015, are at the front of the “next generation” of MROs – and they plan to be there for a while

“It’s been very exciting,” says Rulli, of his first year as Southern District MRO. “Lots of milestones – first district competition, standing on the other side of the fence at the provincial competition, and then the IMRC [International Mines Rescue Competition] was exciting.”

“I think everything I expected to happen happened – the training, competitions, meeting new people. I knew that had to happen, and it was exciting,” says Rulli, who joined Ontario Mine Rescue as a volunteer a dozen years ago at CGC’s Hagersville Mine.

Also in the next generation are Jason Leger in Timmins District and Shawn Shail in Kirkland District, who both started in January 2016, and three more positions are scheduled to be filled in 2017 as retirements and growth of services change Ontario Mine Rescue.

Krell, MRO for Thunder Bay-Algoma, is no less effusive than Rulli about his first year. His first provincial competition as an MRO “was really eye-opening,” and the IMRC was special.

“I really enjoy the job. Getting to do something I like every day is really something,” says Krell, who credits the mine rescue volunteers in Thunder Bay-Algoma with an easy adjustment.

“It’s a good group of guys in this district,” says the former volunteer with Wesdome’s Eagle River Mine, who saw “the same type of culture in the other districts” during his travels while training.

Both Mine Rescue Officers rely on the support of more experienced volunteers.

“They might not be as current on things as I am, because they no longer compete, but I draw on them and their experience during training,” says Krell.

“I recognize them as mentors, not only to me, but to the rest of the volunteers I’m trying to train,” says Rulli. “They have tribal knowledge that should be passed along.”

Ensuring that volunteers get the required training hours has been a common challenge.

“It’s hard to make sure everyone gets the training,” says Krell, especially when the lesson requires extra preparation, such as working in smoke or using the rock splitter. A close working relationship with an operation’s mine rescue coordinator is key.

“Training, at times, seems to take a backseat to production,” says Rulli. “It can be a challenge to keep mine rescue at the top of the list,” not just the training, but maintaining the roster.

While Rulli also finds keeping up with Ontario Mine Rescue’s “paperwork” a challenge, for Krell it’s the extra hours required to travel the distances between the mines in his district, which makes scheduling “manageable but difficult.”

The appointment of a new MRO based in Thunder Bay to help serve Red Lake and Thunder Bay-Algoma districts should ease the situation, he says.

Nonetheless, he and Rulli are looking forward to their second year and years beyond.

“I was really nervous last year when it came to competition training,” says Krell, who trained teams for the district event, but not the provincial.

“Lac des Iles won the district, so Duane [Croswell] trained them. So I’m still looking forward to do that.”

This year Rulli will be the host MRO for the Provincial Mine Rescue Competition, tentatively scheduled to be held at Compass Mineral’s Goderich Mine.

“We’re looking forward to that,” he said. In fact, “all the [southern district] mines are interested in [hosting] that” so there’s a lot to look forward to.

“I was really impressed by the [mine rescue] staff. It’s a great group of guys, very knowledgeable and easy to get along with,” says Krell. “We all share the same passion for mine rescue.”